What Happens In Vegas 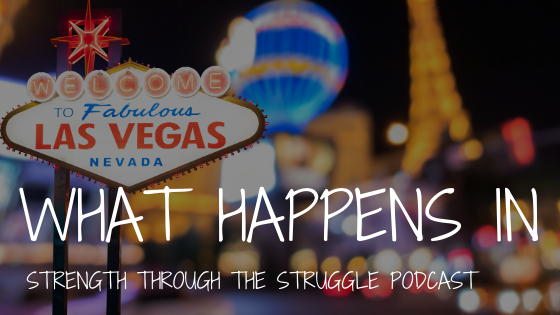 What Happens In Vegas

What’s the opposite of “What Happens in Vegas, Stays in Vegas? I’m here to tell you in this episode of the STTS. Let’s get to it.

If you live in the United States, or possibly other countries as well, you may have seen the commercials advertising a visit to the city of Las Vegas. There are dozens of commercials, all about 30 seconds long with different storylines.

Each commercial, regardless of the storyline, promote the idea that as long as nobody back where you live knows about what happens, then do whatever you like in Las Vegas. Because What Happens in Vegas, Stays in Vegas.

It’s a bit of a wink-wink, nod-nod approach to life. If nobody knows, there’s no crime. No knowledge = no harm = no foul is not the actual outcome. Now, I totally disagree with that mentality but that is an episode for another day.

I distinctly remember hearing this from my mother one summer day. The neighbor’s severe alcoholics and parents were raising hell with each other. But the message was clear. Do not repeat what goes on inside this house, outside of this house. To anybody! Ever.

Now my mother did the best she could trying to raise us kids. Given, her own upbringing, which was ugly, to say the least, the deck wasn’t stacked in her favor. She and her three sisters suffered many types of abuse at the hands of my grandmother who was mentally ill for most of her adult life.

We will never know exactly how my grandma came to be mentally ill and abusive. Rumors have it that she was raped and miscarried a child in Italy while my grandfather came to the United States to find work and a house for them.

The abuse my mother experienced growing up along with being married to my father, who wasn’t the best of role models in town, gave her more work than she could handle with five children all under the age of five at once.

When my mother told me, “What happens in this house, stays in this house,” I couldn’t understand why she said it. What was so bad about what happened at our house? I mean it wasn’t perfect but it wasn’t the worst place on earth as far as I could tell.

What I couldn’t tell though was just how far off of center our home actually was. My mother knew something wasn’t right. I felt something wasn’t right but I couldn’t define it in my childlike mind. My mother also felt helpless to do anything about it. We are talking about the 1960s and life was very different back then when most mothers didn’t work outside of the home.

So what does all this mean? In my life, I’ve found that things done in the dark and/ or kept in the dark are there because nobody wants them to see the light of day. I get it that our bathrooms and our bedrooms are private places. I’m not talking about bathroom habits or somebody’s sex life.

Certainly there are conversations, and things that happen in a home where there is no need for them to travel outside the family circle.

I’m talking about things like abuse in all its forms. Physical abuse, mental, abuse, sexual abuse, emotional abuse, financial abuse, spiritual abuse. When these things happen, the perpetrator does not want you to tell anybody about it. The reason is they are all harmful things at the very least, but many are also criminal as well as unethical or immoral.

When I need to keep something in the dark, so the deed remains unknown to the public including authorities, that is for the person doing the abuse to stay in the clear and out of trouble. Things that went on when I was a child, frequently were swept under the rug or given a shrug of the shoulder and a comment like, “It’s none of our business.

There are numerous things I and many others lived through that if they happened today, in 2019, people would be arrested for them and likely do serious jail time.

The only way to deal with the darkness in this world is to shine some light on it. Light doesn’t allow things to hide. Light allows us to see things for what they really are. Light heals. Light provides one thing that is absolutely necessary for almost everything on earth to grow.

Truth needs to be stated and shared where people are being harmed. I encourage everyone listening to this to bring the darkness out into the light and let the light do its job of providing an environment of healing and growth.

Before you go, thank you again for listening. It means a lot to me. Would you please share this episode with others. It can’t help if it’s not heard. Thanks again and I’ll see you soon.

Subscribe to the Podcast
Check out the previous episode