And Life Goes On 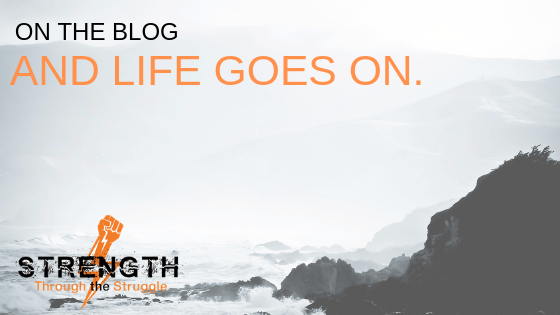 AND LIFE GOES ON…

I stood on the periphery and watched for a couple of minutes as life went on in front of me.  Everybody was running around with kickballs, shooting hoops, playing on playground equipment and having fun in lots of different ways.  Everyone that is, except my son.

Josh stood in the middle of the paved area of the playground by himself.  There were probably one hundred twenty kids outside for their lunchtime recess and another ten or so adults.  Josh was in third grade and I had stopped by to check in on him.I would frequently get calls from the school to let me know Josh had fallen down as he was still very unsteady on his feet.  A sudden stiff wind could actually knock him over at that time.  Checking in on him wasn’t out of the norm and aside from being a bit worried every time he wasn’t with me, truthfully I plain old missed him.

When I walked out back to the playground and scanned the area for Josh, I eventually spotted him amongst the swirl of activity that is natural on playgrounds.  Sadly he wasn’t part of the activity.  He stood alone, in the middle of the asphalt as the other children went about doing what children do best, playing.

My heart sank and I felt terrible for Josh.  I can’t say for sure what he was thinking but it sure looked to me like he wanted to be a part of the action.  I felt empty seeing him there by himself.

This young boy, who had been through so much already in his young life, was all alone in the middle of this playground and not a soul to play with.  He  didn’t appear to be noticed by anyone.  To me it felt unfair.  An injustice on top of an injury.  My sadness shifted to frustration then indignation and anger.

In my mind, Josh had stood at the door of death, fought his way back and while not completely healed, (nor would he ever be) had already climbed the equivalent of Mount Everest just to be able to stand on his own two feet.  In my mind how could anybody NOT want to hang out with him?

But such is life.  We don’t all fit everywhere.  And we don’t notice some of life’s details that are right in front of us.  It’s sad when you see a person who is clearly alone.  When it’s your own child the sadness goes deeper.  It penetrates the soul and the picture of them being outside the group takes up residence in your memory as this one did in mine.

I’m pretty sure similar scenes play out daily on many, if not every, school playground across the country.  Regardless of whether there are children with special needs involved.  We’ve all been there on one side of that coin or the other.  The one standing there alone or the one unaware of the other’s aloneness.

I went through an interesting exercise once during an Advanced Training with a friend of mine, Dan Millman.  Dan is an incredibly gifted teacher, author and all around nice guy whose work has inspired millions.  A world class gymnast, while at U.C. Berkeley and with too many accolades and awards to list here.  Dan is quite possibly most known for his book “Way of the Peaceful Warrior.”  If you have not had a chance to read his work, listen to him speak or train at an event with him, take the first opportunity you can to do so.  It is very frequently life changing.

The “Death Fairy” exercise as Dan affectionately refers to it goes like this.  At a moment unbeknownst to you, there would be a tap on your shoulder from Dan.  At the moment of your tap, and it didn’t matter where you were or what you were doing, you had to “drop dead” on the spot.  You had to lie there for a certain amount of time, eyes closed and motionless, as if you had just keeled over.

What actually made this so powerful was that everybody else had to keep going about their business as if nothing had really happened.

The “Death Fairy” visited me as we (the entire group) were walking along a path on the side of a gently sloping hill.  We were headed to another location to take part in a ropes/ confidence course that was away from the ranch where the majority of the training took place.  One second I’m alive, the next I’m “dead.”  The people walking in front of me had no idea I was “gone” and the people behind me just kept on walking.  My “death” did not cause mass hysteria or the world to stop turning.

It’s an interesting exercise to go through while you are still alive.  Being an observer instead of a participant.  The fact that nearly nothing in this world changes “when you die” is a bit sobering.

Of course there are family and friends who would be devastated by our passing.  An abrupt or seemingly early passing can be especially difficult.  There would certainly be a hole in the lives of those closest to us.  But the world at large isn’t really going to change or alter it’s behavior because we are no longer here.  As a matter of fact, the world at large won’t even notice we are gone.

So what’s the point?  The point is that Josh, like so many people who don’t fit in easily, went unnoticed that day and quite possibly many other days as well.  It wasn’t an existential exercises adults do.  It was real life.  Even though Josh was very much alive, surrounded by scores of children and adults, he was alone.  It wasn’t malicious nor intentional necessarily but it did hurt.

Over the years, as Joshua has become more aware of his situation, he has become more able to articulate his own loneliness and feelings of wanting to fit in.  He actually expresses his own frustration and at times, anger with his circumstances.

I try to spin it as “this is the hand we were dealt.”  That this is our life and we are going to make the best of it.  We may have to do extra work but it will be worth it.  Wishing for an easier life won’t give us an easier life.  The best shot at life ever feeling easier is to become stronger and the only way that can happen is for us to persevere.  Surely we will find our strength through the struggle.