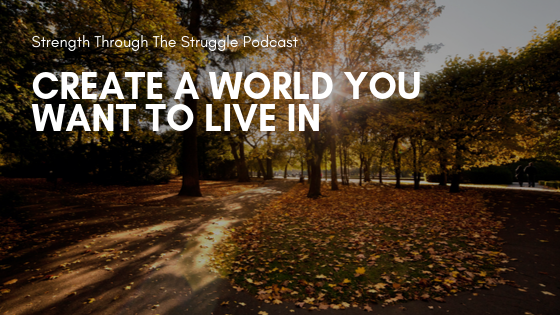 First off, I want to Thank You! For listening today. It means a lot to me, that you brought your time, your energy and your attention here today. Thank you.

Sometimes as I look around this world we live in, it can seem pretty confusing. There are often things going on that don’t make sense to us as an individual member of the human race.

People do hurtful things to others.

People do harmful things to themselves.

People do illegal, unethical and immoral things to themselves and others.

If we try to look at the world from a “logical” perspective it is impossible to do effectively. In part because what is logical to me, isn’t necessarily logical to you.

The values I hold may not be the same values that you hold.

What I feel is moral or ethical, you may not feel the same way about.

That being said, one thing I’m 100% certain of is, I’ve never seen any good come of focusing on the negatives in our lives. With one exception… focusing on a negative is only valuable if we use to create something positive.

There are plenty of things wrong in this world that many of us would agree on. Violence, abuse, abandonment, poverty, bigotry, sexism, sex trafficking, homelessness. I mean there is a good portion of the world who doesn’t even have clean drinking water.

A world that is a little less poor.

Has put a dent in the sex trafficking trade.

One with clean drinking water.

A world with less waste and pollution.

How about a world that is less about consumption and more about compassion or conservation.

What about a world where there are more kindness, patience, and consideration for others.

I want to share with you a few people who decided they would actually create a world they want to live in.

John Walsh – John Walsh’s son Adam, who was only six years old, was kidnapped and killed by a sociopath. John went on to create the TV show America’s Most Wanted as well as The Hunt. Those shows were responsible for putting 1,200 violent felons in prison where they couldn’t hurt kids and adults anymore.

Larry Hagner – Larry grew up without a father that showed him how to be a good dad. Larry desperately wanted to live in a world where dads celebrated and worked hard at being good dads so he created the Good Dad Project Podcast and has helped change for better fatherhood for families around the world.

Candy Lightner – Candy had her heartbroken when her 13-year-old daughter Cari was killed by a drunk driver. She wanted to live more happily in a world where parents didn’t have their children taken from them by someone who got behind the wheel of a car and drove drunk. So she founded MADD – Mothers Against Drunk Drivers which can be found in all 50 states as well as each province in Canada fighting to keep drunk drivers off the roads.

Andrew Lewin – Andrew sees a need for a better conservation in our Oceans. Less Pollution, better management of this beautiful resource. He created a podcast, Speak Up for Blue to help create a world he is happy to live in. One that values our natural ocean resources now and for generations to come.

John Williams – John grew up in an environment of poverty, violence, and abuse. He saw how those three dynamics challenged his own life and he wanted to create a world where teenagers were taught how to make better choices with health outcomes. That world is being created by his non-profit, Life that counts.

Ryan Michler – Ryan thought he knew how to be a man. He came to the conclusion that in fact did not know how to be a man when his wife took their 10-month-old son and left him. Ryan did some soul searching and realized his ideas of being a man weren’t working so he started to work on himself. Eventually, he founded the Order of Man movement which is shaping men into a strong and positive version of a husband, father, and man.

My son Josh and I are creating a world we want to live in. A world where there is more interaction, understanding, and connection between what would be termed normally developed people and those people who were born with or acquired intellectual deficits.

I want to see a world where people are more kind to and connected with the intellectual disabilities community. I believe if we were interacting in more ways in more environments between normally developing people and those with these extra challenges, we all will.

I live with someone who has that extra life challenge and you know what, my life is better because I do. It has most definitely made me a better person in so many ways. I believe when these two communities to spend more time with each other in school, at play, and at work, the world is a better place. And that is a world that I want to live in.

So, I have a question for you…

It’s possible. It’s actually possible to create a world you would want to live in.

I want to thank you again for listening. I would love to share a message of encouragement and possibility and how to overcome any adversity with your group or church or organization. If you go to markgoblowsky.com you can click on the contact us tab and send me a message. I will be sure to get back to you within a day or two.