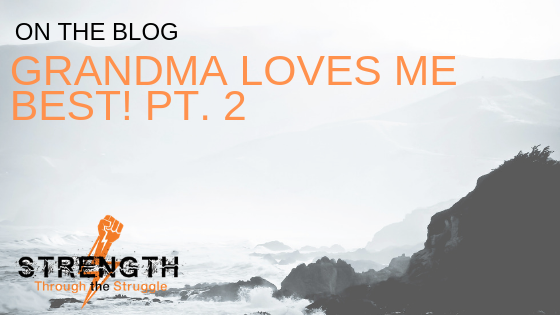 Josh tells me everyday, “Grandma loves me best!”  I don’t hear it occasionally.  It’s literally everyday and many, many times each day.

He reminds me when it’s just the two of us and he reminds me in public.  Josh gets great satisfaction from the knowledge of how my mother loves him more than she loves me.  This all started while my mother was visiting us several years ago.

You see, mother is an amazing pastry chef as well as a truly great cook.  This isn’t your run of the mill pastries, breads, cookies and pies.  It’s Bon Appétit magazine, made from scratch, five star restaurant good food.  And, she’s only gotten better over the years.

I picked Josh up after school one day and we headed back to the house.  My mother was waiting inside with a piece of cake for each of us.  As we sit down at the table, my mother slides one plate in front of me and the other in front of Josh.  One problem.  Only one piece of cake had frosting on it and that one was placed very purposefully in front of Josh.

We say our prayers and then I make a point of bringing up the fact that only one piece of cake has frosting and for some reason it is sitting in front of Josh.  I direct the comment towards my mom and her explanation was simply that she ran out of frosting.  It appears to me that she does not feel the least bit bad about this so in an effort to create a bit of dramatic affect, my next question is directed at Josh.  “So why do you get the piece with all the frosting?!”

Josh is grinning from ear to ear at this point like the cat who just ate the canary.  He turns to my mother and asks her, “Grandma, why do I get the cake with all the frosting?”  My mother, looking at him responds with, “That’s because I love you be…”  Realizing what she was about to say she stops cold in her tracks and cuts off the word “best” right in the middle.  I on the other hand see a golden opportunity for some fun and decide to run with it.  With as much indignation as I can muster up, I say to her, “Go ahead Ma’, just say it!  You might as well just get it out!”

My mother appears to have had a split second of indecision about what to do next…  ‘Now what?  I can’t believe I let it slip!  Do I dare say it out loud?’…  But the indecision passes.  She just couldn’t restrain herself and feeling like she now has permission to let it fly, she proceeds to finish her initial thought and blurts out, “That’s because I love you BEST!”  At which point she starts laughing so hard she is nearly falling out of her chair.  Shamelessly I might add!

Josh is beaming with joy and I am playing the victim on the outside while laughing on the inside.  “Seriously Ma’?  What is up with that?  I’m your son!  How could this be?  The injustice…  this just isn’t right!  I can’t believe you love your grandson more than your own son!”

Josh has run this memory up the flagpole more times than I can count.  Just this past Monday while hanging out at the Kung-Fu school where we were hosting kids with various disabilities for some fun martial arts training, Josh insisted I tell three separate chaperones for the field trip the whole story.  He gets such a kick out of hearing it that he regularly asks me to tell it to him even when nobody is around.

Granted I may have thrown some fuel on the fire with the over the top response with my mom, but hey, it was so worth it.  Josh will be telling that story long after I’m gone.  And I hope every time he does, he gets just as much joy out of it as he did that day.