How To Simplify Life Without Regret 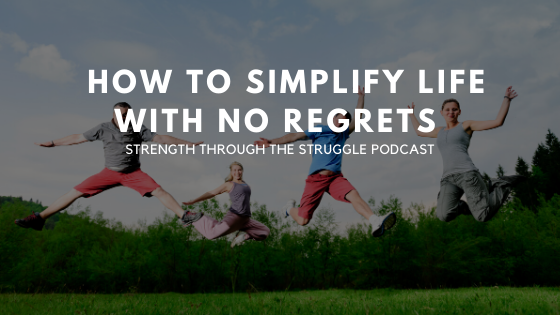 I once heard a story about a famous landscape architect. He was a master at what he did. He traveled the world creating amazing gardens and landscapes for prestigious locations.

It is said that on days when he felt particularly challenged, he would pull out a piece of paper from his pocket, look at it, nod, fold it up and get to work creating another masterpiece.

People were astounded by the brilliant designs that would seem to come out of nowhere after he studied that tiny piece of paper.

Eventually, this master designer died. After the funeral, people went to his house for food and to share stories they each had, of this great man. His colleagues approached his widow and asked her about that mysterious piece of paper. They were convinced it contained the secret formula to his success.

She told them she did not know what was on the piece of paper. He kept it in his coat pocket normally and she never asked to look at it. After many requests for the opportunity to see the paper, she went upstairs and looked in the closet for his coat. Inside the coat pocket was the folded-up slip of paper.

The widow brought it downstairs and handed it to one of his colleagues. As everyone gathered around, the man unfolded the paper. Convinced that whatever was written on it, they would now have in their possession the key to their own success.

When they looked at the unfolded slip of paper, it simply said, “When laying sod, always put the green side up.”

It’s a brilliant little story about remembering what is most important. It’s also about not taking things for granted.

It is too easy to make life complicated. Especially in the United States. But I believe the temptation to complicate life is everywhere in this world. With the growth of technology and the rate of change that it occurs with, it often seems like we are playing catch up every day.

One of the most valuable things I’ve ever done was to take the time and learn what I valued most in this world. I’m not talking about possessions either. I’m talking about what was intrinsically important to me to be as a man, a husband, a father, a businessman and as a human being who was created for a purpose in this world.

I also had to learn that I couldn’t have everything all at once. But if I did the work of figuring out my own value system, I could have the most important things to me, at the center of my life daily.

The Important Things In Life

Figuring out what is most important to me, allowed me to take other, what seemed like important things, out of my life, off my plate and outside my head.

I learned to remember when laying sod, to put the green side up.

If you would like some help clarifying what’s most important to you, and want to simplify your own life, stop by my website and send me a note. I answer all the emails myself and will get back with you ASAP. If you are on Facebook, you can reach out to me there as well and send me a direct message.