Finding Strength After Losing Everything 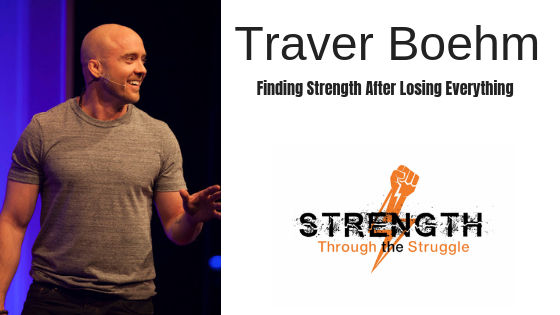 Traver Boehm thought everything in life was perfect until he had a head on collision with pain. Within a short period of time he lost his child, his wife and his business. Instead of hitting drugs, booze and sex to sedate from the pain, he leaned into the pain in an effort to ultimately heal his life.

This episode is an example of one of the most powerful and extremely difficult choices I’ve ever seen a person make… the choice to isolate themselves from all external stimuli and be alone with their own thoughts for a period of 28 days. You read that right, Traver decided to live without human contact, electricity or even light. He was isolated in a hut in total darkness.

Can you imagine 28 days in the dark, alone with only your thoughts and nothing to distract your mind from them? All in an effort to deal with the pain up front and not keep putting it off into the future. Such an extreme, but powerful choice at the same time.

As I reflect in my own life, every effort I made to avoid the necessary pain that is inherent in growth, didn’t make that pain go away, it simply put off the pain to a later date. Frequently the pain, by putting it off only intensified it.

It’s kind of like a credit card. If you allow the debt to go on, it simply gets bigger. The bigger it gets, the harder it is to deal with it.

Life is the same. Pay me now, or pay me later, Either way, we are going to pay. Why not pay up front and move on.