Welcome to the World, Josh! 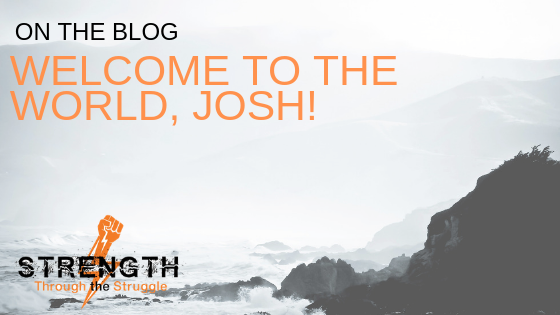 The first time I held my newborn son I wept and I could not stop. The love I felt inside came out in tears and quiet sobs.  I couldn’t contain the emotions I felt or find a single word to express myself.  I was overwhelmed and the tears poured forth like a mountain stream during the spring thaw.

Looking at my son as I held him in my arms for the first time it was with a sense of awe.  This new creation was somebody I didn’t know but I knew I would do anything for.  Somebody who I had no idea as to what kind of person he would become but to me he would be special.  I didn’t know if he would be tall or short, muscular or thin, scholar or athlete, carpenter or lawyer but I knew I would root for him all the way.  While I had no idea what kind of personality he would develop, what talents, gifts or ideas he would bring with him into the world, whether he would be rich or poor, none of that would matter.  I just knew I loved him.

And that is how this story starts.

My son’s name is Joshua Michael Goblowsky and he has brain damage.  While he came into this world in perfect health, as fate would have it, he experienced a life altering event.  That event was a senseless act of carelessness that fills you with emotion and at times, can call into question much of what you believe.  His story is both heartbreaking and inspiring, but mostly inspiring.

His journey is also my journey.  While he HAS to walk this road, I choose to walk it with him.  To tell the truth, I don’t like being on this road and if it was up to me, we would be on a different road.  This road is hard.  Very, very hard and it is a road that many people have to walk.  Families whose lives have been forever redirected because one or more of their children are also living with a disability or handicap.

If I was writing the script of life I think I would have written out the part where a catastrophic accident results in permanent brain damage to a three year old.  I would have written a script that included riding a bicycle, roller skating and playing with friends.  My script would have included Josh being able to swim on his own and playing football or competing in some other team sport.  My version of life would have also included being able to read and do math and other core subjects at his appropriate grade level, getting good grades in school and maybe a college degree someday.

While I didn’t get to write the script, I am now the editor and creative director.  I do have some say so in the direction things go and how they turn out.  Not total control by any means, but the ability to influence where we go and how we get there.  I had no say so in the antagonist in this story.  It was chosen for us.  I get to determine how the protagonists choose to respond and that gives us power instead of weakness.

Josh may not be able to swim on his own but when he gets to a beach we hold him up in the ocean water and help him have fun, his experience in the world is as normal as can be and his smile reflects that.  Team sports for now are not in the picture but we are out in the backyard playing football and the last game we played was a 35-7 victory in Josh’s favor… again!

The reading, the math and other school work is what it is.  His favorite subject is science and on more than one ocaision he has stated he wanted to go back in time to visit himself when he was younger.  Not bad for a child with intellectual disabilities/ delays.  Josh wants to be a Kung-Fu instructor and a Businessman when he grows up.  I suspect he will accomplish both.  Maybe not the traditional path but he will get there.

We keep plugging away.  One foot front of the other.  One day at a time.  Even when he is tired or bored.  We keep pushing.  We also pay attention to his moods, emotions and energy in order to get him the breaks when he needs them.

Most days we we are able to stay future focused.  We focus on where we want to be.  In particular, WHO we want to be most of all.  To become the type of people who can succeed in spite of our disabilities.

Even though I don’t like the road we are on, and quite honestly, neither does Josh, we are on it and we are choosing to make the best of it.  Today, tomorrow and God willing and the creeks don’t rise – all the way to the end.