When We Lose It 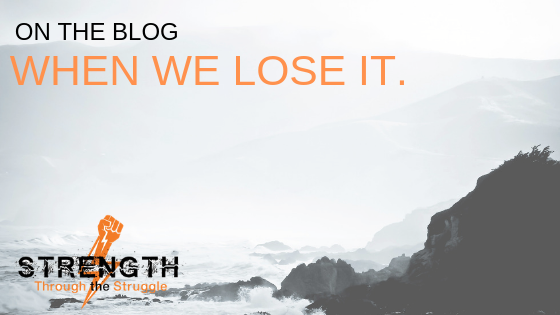 I LOST IT WITH MY SON LAST WEEK, I’M NOT PROUD OF IT, BUT…
When my son, through his tears is saying, “Daddy, could you please talk calmly to me?” you know things have gone south.
It was our semi-annual trip to the Rehabilitation doctor for his check up. One of a couple of thousand appointments since the accident and it was the same old conversation,
“Dad. I don’t like wearing these boots.”
I know son.
“When will it be over?”
I’ve told you before buddy, I don’t know for sure. Doctor Franco said when you haven’t fallen for at least six months then we can talk about it. You fell a few weeks ago. You have to be willing to do the work to improve your balance. That takes time and it is the only thing that is going to change this.
“Yea but I really don’t like these boots! Or this helmet!”
I can feel my emotions begin to get charged up. I was at my wits end and had been consciously and quietly contemplating how to handle the questions the next time they would come up. It was really pissing me off, again. I’m really trying to be patient but this has been going on sooo long and I feel I’ve exhausted every word I can to help him deal with his problem. I let it fly.
“What the hell do you want Josh? What the hell do you REALLY want? I can’t make this different! The accident happened! The goddamned accident happened, the f#cking truck driver hit your mothers car and ran off, you got hurt and our lives are forever different! I can’t change a goddamned thing about it.”
The tears are rolling out of his eyes and he has slid closer to the passenger door. He is shocked and looks scared.
“Do you understand me? Can you hear what I’m saying!!! THIS IS OUR LIFE! This is IT! We have to deal with it. We have to play this hand. IT’S WHAT WE GOT DEALT! Nobody is going to fix it for us. NOBODY!!! Nobody is going to turn back time and make it all go away. Nobody is going to wave a magic wand and make it different. NOBODY IS GOING TO RESCUE US. They can’t!!!
“I have done absolutely everything I could to help you, to try to make the best of this completely shitty situation that I don’t like either. THERE ISN’T ANY MORE THAT I CAN DO. IT’S UP TO YOU NOW. YOU HAVE TO DO THE F#CKING WORK!

Bam! My open palm hits the console hard enough to sound like a gun going off.

‘NO! NO, I’m not going to stop! UNLESS OF COURSE YOU WANT TO START LISTENING TO ME! I don’t know what to say to you, to get through to you, or how to make it better. We have been through this a thousand times already and you keep expecting the answers to change!
“If you want things to be different then it is up to YOU! DO YOU HEAR ME? IT’S ON YOU! Things aren’t going to be different Josh unless YOU make it so!

I feel like shit. He keeps saying, DAD! DAD! Pleading with me to calm down. He’s crying and raising his own voice trying to establish some authority but I won’t back off. I don’t want to hurt him. I don’t want to overwhelm him.

But worse, I don’t want him to keep living this fantasy. I knew in my heart it had to be this way today. Most likely, never again, but today this was the way it was going to be.

“So what do you want Josh? If you want it all to go away, that is NOT one of the choices.“
You can’t wish this away or hide from it! I’m sick of telling you the right things but you not making the right choice. If you want your life to be better than what it is then you will have to get off your ass and do something about it.

I hate saying this. I hate being so blunt. I hate raising my voice.

“Everybody we know is in your corner Josh. Doctors, teachers, therapists, family, friends. But it doesn’t matter how much WE care or want things to be better. YOU HAVE TO DO THE WORK. It’s not going to magically change. Nobody is going to wave a magic wand and make your problems go away and your life be amazing!

I feel a bit guilty for the whole incident. I know how an intense moment or incident can be burned into a person’s mind. It happened to me. I don’t want this to be one of those defining negative moments so I try to assuage my own conscious and put things in perspective for him by asking him a question.

Josh, do you know how many times dad has yelled at you in your whole life?
Through his sniffles he says, “Yea. All the time!”
I start laughing.
Are you kidding me Josh? I have raised my voice a total of three times Josh – I put my fingers up in the air for him to see – A grand total of three times! But I get that it feels different than that to you. I’m sorry! Please forgive me.

Now I get choked up. I’m thinking about how much I love him and how good it was to hear those words from him.
“Dad, what’s wrong?”
Nothing.
“Dad, something’s wrong.”
No, there isn’t.
“Dad, I see something.”
Yea, there’s something in my eye.
“Daaaad!” He has a grin on his face tempered by a touch of concern. “There’s nothing in your eye except tears.”
I know Josh…
“Why Dad?”
Because you are going through this and I can’t fix it for you. My heart breaks everyday because of the collision.
“Dad, we’ll be OK!”
I get choked up again…

I know son. I just want YOU to remember that about YOU! YOU will always be OK.
We get out of the car and I give him a hug. He starts to cry a little bit again.
“Dad, are you sorry for yelling at your only son?“

On one hand, I think to myself, “Shit!” and on the other hand I’m glad he knows this isn’t normal for us. I also like the idea that he can stand up for himself and ask for an apology when somebody crosses a line.

Part of me feels like a jerk and part of me doesn’t. Part of me realizes this is life.

Trying to remember those things over the years has allowed me to not blow a cork as often as I might have. Either way, it’s a tough place to know where the lines are. Emotions are funny things. Feelings are powerful and we can get swept up.

I felt frustration but I tried to remember what he is going through at the same time. Life is hard for all parties involved.
Even with as few times as I have lost it, each one has left a mark on him. He thinks three moments out of the over 5,515 days he’s been alive (that’s 132,600 hours) of which I may have ranted for a total of 30 minutes is “all the time.”

Intensity is powerful. Sometimes it’s needed. Sometimes we have to go places we don’t want to go. It’s easy for the lines to blur. I hope I never have to go back there again. He’s a good kid who is doing his best.

Sometimes the volume needs to go up… just not too often.