Building A Playbook For Life With Rusty Ryal 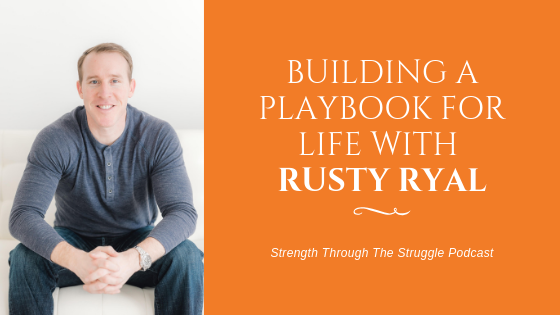 We Hesitate Based On Fear

One day I was playing with my son Joshua on the floor in our living room. I don’t recall exactly what it was. Could have been cars, action figures or maybe Lego’s. He was about two-years-old.

My mother was visiting us from Ohio. She was sitting on the couch watching and at one point remarked, “I couldn’t do that.”

My mother at this point was in her sixties. I thought she was speaking about how it would be uncomfortable for her to get down on the wood floor and play with Josh.

For some reason, I decided to ask her what she meant by, “I couldn’t do that.”

She said to me, “I wouldn’t know what to do to play with him.”

I thought for a moment and said to her, “I don’t know what to do either Ma’. I just get down here and try to figure it out.”

My mother didn’t have time to play. It was the early 1960’s. No disposable diapers. No microwaves. Heck, there weren’t even seat belts in most cars.

Moving Out Of Your Comfort Zone

Attempting to do new things can feel awkward. And in the beginning, they certainly are. But to keep trying is to give ourselves the opportunity to learn and become better at whatever we do.

It’s a bit sad that my mother missed those moments when she was young. She did get the opportunity though to learn to play with Josh eventually. Although it was at the kitchen table and not on our hard, oak floor.

Somebody else who knows how to learn and improve personally, professionally and as a father and husband is my guest this week, Rusty Ryal.

Rusty played Major League Baseball and has a lot of wisdom about life, learning, trying new things, falling down and getting back up. Take a listen here. It’s good stuff!

Check Out The Last Episode