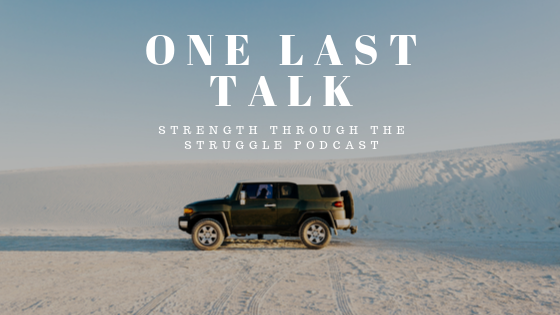 Recently, I had the honor of giving my One Last Talk. If you haven’t heard of OLT, the idea is to share with the world what you would most want people to know if you only had 15 minutes to do it and then you were gone from earth forever.

It is the idea and program of Philip McKernan. If you’ve been listening to this podcast for awhile you may have heard of him here or at a conference, you may have attended or on a different podcast. I’ve interviewed Philip 3 times now. If you would like to hear them the first one is Episode 33 and the second is Ep 99. I don’t recall, at the moment, the Ep number for the third.

I had the good fortune of giving my OLT in Boulder, Colorado. Philip was hosting the event. There were several other people in the audience I knew. I had gotten to know these other people a couple of years earlier at another Philip McKernan event called BraveSoul. That event in Ireland. It was a retreat of sorts and we were there for 8 days together on the west coast in a little village named Ballyvaughn. You could throw a stone into the ocean from some of the cottages.

One of these wonderful people I got to hang out with is a lovely woman by the name of Heidi who is from Great Britain. She happened to be one of my two cottage mates, both of whom I feel so blessed to have been there with.

After I gave my OLT, Heidi came to me and said she was confused. I asked her why? She said her confusion came from what seemed like two different people regarding what I shared about my life and how I saw myself at my OLT in Boulder in 2019 compared to the person I came across as in Ireland in 2017.

I still didn’t really get what she meant. I mean, I live with me, and my thoughts 24 hours a day. And while I knew I was different in many ways over the timeframe of two years they didn’t quite so significant. For the most part, I felt like the same person.

What Heidi shared with me surprised me a bit. She said to me, “In Ireland, you came across as this grounded, wise, loving, beautiful kind of soul. After hearing your OLT today, I couldn’t believe how recently it was that you had these, other, darker thoughts about yourself.”

Even as I’m saying this, it makes me want to pause. I’m thinking about how different I was 2 ½ years earlier. I was bottoming out emotionally. And when I say bottom, I mean the very bottom. I don’t want to tell the whole story here. I’m hoping that my One Last Talk is released as a podcast episode by Philip at some point and if it is, I will share it with you. You can hear first-hand what Heidi heard.

As far as my conversation with Heidi, when she pointed these things out, I could see what she was saying. To hear the OLT and see me in Ireland it did seem like two different people. In truth, I guess I was. There was a lot of growth and change, and shifting between January 4th of 2017, and when I met Heidi in Ireland in June of 2017 and again all the way to when I gave my OLT in Boulder that Heidi was also there for.

I had no desire to present myself as two different people. My goal over the last 4 years has been to be as honest and transparent as I can be with myself first but certainly also with the world as well. But it is hard to be completely transparent about everything in our lives.

In light of that, Heidi’s question still made me step back and ask myself, “Was I wearing some sort of mask during that week in Ireland?” “Was I trying to put on airs about myself and present to the world some guy who didn’t have a problem and Worse some guy who had all the answers because Lord know I don’t.

In giving my OLT I had to go deeper than I ever had before. I decided to share some things I had never shared before. And in so doing, some people who knew before the talk would have learned something or somethings they had never known before about me. And that is the whole idea behind One Last Talk. To share your deepest pain so others can learn they are not alone in this world. OLT was absolutely one of the best experiences of my life.

I didn’t have any intention of sounding like I’m doing a commercial for OLT although I could. I didn’t plan on doing a promo for Philip McKernan although I could and would. And actually, as I’m sharing this with you it occurs to me that I should unpack a little more of what happened for me when I gave my OLT. But that is a story for another day.

It’s hard to tell the complete truth. We are so terrified of being judged for what we think. We are so scared of sharing who we really are, what we have really felt and what we truly believe that opening up to the world can seem like a fate worse than death.

The problem with that is it’s similar to when we look out on the horizon. We can only see so far. We don’t know what is beyond the horizon until we get there. And then we can see the new horizon in the distance. Only then do we get to see what is between us and the new horizon.

We may not be able to see far enough that we know exactly what is ahead for us. Maybe we only have to see the horizon, head in that direction and along the way, find out a little more of who we are and the gift that we are to each other and to this world.

Check out the previous episode